Student activists, responding to the mass shooting at Marjory Stoneman Douglas High School in Parkland, Florida, organized a national walk out to memorialize murdered classmates, to protest gun violence, and to call for national action from elected officials.  Across the country, at exactly 10am, 100s of thousands of students (100,000 in New York City alone) walked out of their classrooms to participate in a 17 minute long protest, one minute for each victim of the Parkland shooting.  Scenes from across the country:

Students at Granada Hills High School in Los Angeles spell out "ENOUGH' in a call for action against gun violence.#NationalStudentWalkout pic.twitter.com/BPQm0faohG

This is from my middle school in FL. Honestly shocked that they participated. But so so proud. #NationalStudentWalkout pic.twitter.com/dK0HHMAHmd

Imagine if all the students who participated in the #NationalStudentWalkout all vote in 2018 and 2020! pic.twitter.com/wiF0iM2y8y

Adults had various levels of difficulty accepting what the students had to say.  Citing safety and disruption concerns, school districts around the country threatened disciplinary action if students participated in the walk out.  And, of course, people continued to lob vile opinions about some of the organizers of the Never Again movement, such as Republican candidate for the Maine House of Representatives, Leslie Gibson, who called Parkland survivor Emma Gonzalez a “skinhead lesbian” and referred to her schoolmate David Hogg as  a “bald-faced liar.”  Fox News host Sean Hannity used his radio show to first brag a little about the purity of his racial ancestry and then to dismiss the student marchers as indoctrinated.

It is 2018 and gun violence is a polarizing issue, so the vileness is expected and fairly easy to flip on the perpetrators.  What is less expected but also troubling is the viral response that students should not “Walk Out” but rather “Walk Up,” meaning that they should make an effort to include others and to break down social barriers that are at the root of bullying and exclusion in our schools.  #WalkUpNotOut trended on social media, typified by images like this:

There’s another movement happening today…
Some students and teachers are pushing for #walkupnotout
Their goal? To honor the victims of the Parkland shooting by making a new friend, understanding someone going through a hard time and being nice. pic.twitter.com/hfTeF3cClI

This idea is painfully, almost achingly, well-intentioned by most of those promoting it.  However, it misses the mark in several important ways. First, the syntax of “Walk Up Not Out” directly tells students NOT to participate in the Walk Out and use their free speech rights in their chosen manner.  Several graphics for the idea actually cross out the word “Out” to replace it with “Up” as if participating in a one time protest is antithetical to participating in daily kindness.  Second, it conflates equally important issues that deserve their own platform.  The Walk Out was organized to signal that students and their supporters are weary of America’s massively disproportionate share of the developed world’s gun violence and that they are willing to take political action to change that.  The concept of walking up is one that tries to confront the issues of gun violence with issues of bullying and social isolation – issues that deserve their own independent attention.  It is true that bullying victims are twice as likely to bring a weapon to school, but the assumed link between bullying and mass shootings is empirically unverified. “Walking up” is likely a good basis for reducing the risks of teen suicide, but as a response to mass shootings, it is not strongly correlated.

Other critics quickly pointed out that the “walk up” meme is attempting to deflect attention from America’s outlier position regarding guns and gun violence and to place the blame for mass shootings on the victims themselves.  If the shooter had been treated better, then the victims would not have been victimized:

#walkupnotout asks students to take responsibility for the mental health of their classmates, suggesting that school shootings are *their fault* for not being "nicer." It's victim-blaming. Stop it.

Although many quickly protested that was not their intention, I cannot help but to agree with the accusation of victim blaming.  Many places, frequently schools, could be much kinder environments that eschew bullying and offer people inclusion and warmth.  But the need for that change should not be held up as a reason to tell young people to halt their creative protests on other issues, nor should anti-bullying efforts be conflated with addressing gun violence.  And above all, the responsibility for addressing and alleviating bullying within schools lays squarely upon the shoulders of the adults who run the place and have ultimate authority over what goes on in school.  A school culture of bullying can be toxic – and it can be lethal mainly in the form of suicide – but the people who let it go on unchecked are the people with the legal and moral authority to intervene.

And additional problem with the walk up meme is that it is attempting to silence student protestors at the exact moment in time when those of us in older generations should be quiet and listening to what they have to say.  The survivors of Parkland have impressed a great many people, but they are not exactly atypical of their generation and the general awareness of inequity and the need for change that they embrace.  For two generations now, the adults in the room have largely stood by and watched as the economy decoupled rising productivity from wages, and as earning potential for anyone without a college degree has collapsed: 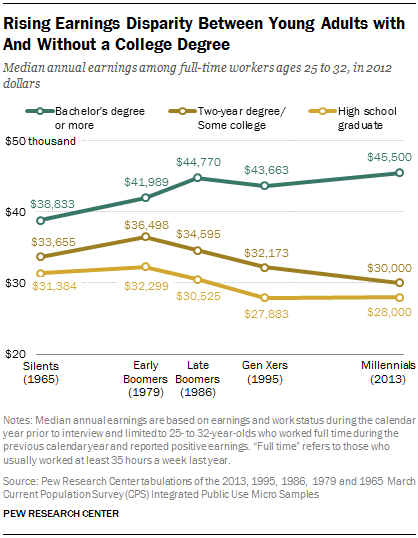 We’ve stood by as the concentration of wealth have made it possible for small groups of extremely wealthy people to wield power far disproportionate to their number, leading to inaction on issues as broad-ranging as climate change to gun policy.  We’ve stood by as two generations of African American and Hispanic men have faced mass incarceration and the economic, social, political, and racial costs that it inflicts.  We’ve stood by as police departments have been increasingly militarized in communities of color.  And yet, even as representatives fail to take action even on issues that have broad support, voting-aged Americans continue to send them back to Congress at rates as high as 90%.

The young people at the center of yesterday’s walk out event are well aware of these facts, but when they decided to take a day of collective action to tell the rest of the country that they are finding a common voice on an issue the adults have not figured out in decades, they are being told that they are doing it wrong.  This is as completely backwards as the media firestorm aimed at Colin Kaepernick’s protest of police brutality that somehow make even the most understated of protests the wrong thing to do.  We need to comprehend that we’ve made at least as much of a hash of domestic policy as the “Best and Brightest” managed to make of foreign policy in the generations before ours (and to be fair — foreign policy is not exactly in an upward spiral). Young people are telling us that they are paying attention to how we have failed to be stewards of a “more perfect union” for our Posterity, that they can command the attention of the media, that they can energize their peers in great numbers – and that they want change.

It is time for us to listen.

Writing and Activism by P.L. Thomas