Going After Tenure — Missing the Real Needs of Students

There is a character in the 1984 movie “Teachers” starring Nick Nolte and JoBeth Williams, who is unaffectionately named “Ditto,” played by Royal Dano.  Ditto is old, orderly, mind-numbingly boring and tenured.  His “teaching” consists of running off enough mimeographs each day for all of his students, sitting in the back of his classroom where he can see all of his students in rows, having his ditto sheets distributed, reading his newspaper and having students turn in the dittos when the bell rings.  So rigid is his routine that the students can do the entire process without him, a premise tested when he suffers a fatal coronary in class and none of his students notice.

The movie’s satirical take on jaded teachers strikes a humorous note by playing off of a lot of stereotypes and some common experiences.  Many people, sadly, have experienced classrooms with teachers either out of their depth or beyond their professionally useful life.  In a system of 60 million students and over 3 million practitioners, quality cannot possibly be uniformly excellent.  The situation in the movie also speaks to a number of popular if misinformed stereotypes, the most persistent of which is that once granted tenure, a teacher has no need to remain vigorous or skilled or even all that present in the classroom.

This movie must keep Michelle Rhee, Campbell Brown and Whoopi Goldberg up at night.

The problem, however, is that a lot of that is hooey.

Assume, for example, that tenure is a problem, as reformers do, because it keeps low quality teachers in teaching for too long. This, however, is as much a function of administrators not doing their evaluative job as it is the due process guaranteed by tenure.  Further, if it was tenure that was the actual problem, we would expect to see negative impacts on the performance of those districts that have the largest portion of their faculty with tenure – suburban districts with the most experienced faculties compared with urban districts that have extremely high turn over rates.  This, however, is not the case.  When the PISA examination scores that give our political class such concerns are broken out by the poverty characteristics of communities, we see startling effects: 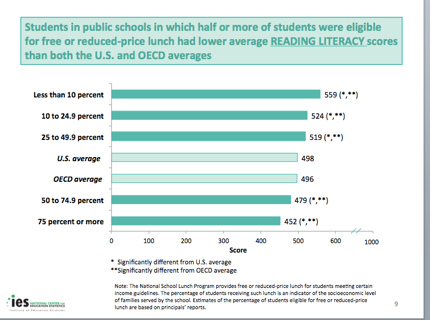 So students who do the worst on international examinations are those who live in high poverty districts which, because of income segregation, tend to be urban and rural.  Despite the movie “Teachers”, those students do not attend schools that are full of dusty, burnt out teachers who are waiting to die at their desks.  Quite the contrary.  They are far more likely to attend schools with extremely high concentrations of novices.

Helen F. Ladd, professor of economics and public policy at Duke University, notes that today, over a quarter of the teacher workforce has less than five years of experience teaching.  This is a problem because experience actually matters in teacher effectiveness, and research supports the need for teachers who have made it through the steep learning curve of their early years in the classroom.  Teachers improve in effectiveness measures dramatically in this period, and while their gains level off, a workforce that is perpetually inexperienced is a workforce that is not optimally effective.  According to research from the University of New Hampshire’s Carsey Institute, districts that are urban, high poverty, high minority and rural are far more likely to have high numbers of first year teachers than suburban counterparts. Ten percent of the districts in their sample had a “critical value” of more than 17% novices teaching classes, which was double the overall sample average and is correlated with other effects such as teachers leaving the profession altogether.

It is crucial to pause for a moment and consider the contradiction here.  Our lowest performing schools are not plagued with teachers who are sit behind the mythic protections of tenure and do not do their jobs so much as they are burdened with a continually changing faculty who begin a steep learning period but who cannot be guaranteed to stay past five years.  Further, such schools are burdened with the attendant costs that come with high turnover rates such as recruitment and training, giving fewer resources for other forms of support.  So the attack on tenure has it backwards because the real problem for staff at our most struggling schools centers on too little retention of teachers.

Nicole S. Simon and Susan Moore Johnson of Harvard’s Project on the Next Generation of Teachers note many of the new teachers who leave working in urban and high poverty districts do so because of working conditions in such schools rather than any student demographic.  In fact, negative school climate and organizational factors are such powerful predictors of why teachers leave schools, that no student based factors remain statistically significant.  “Positive, trusting, working relationships” and “a strong sense of collective responsibility” prove to be strong predictors of schools that manage to retain teachers over schools with nearly identical student demographics.  Considering all of this, if reform advocates TRULY wanted to assist children who suffer because of bad teachers, they ought to advocate for the following:

1) Ways to support administrators doing their evaluative role seriously. As has been pointed out from numerous sources, tenure grants teachers due process in any effort to remove them from the classroom.  Administrators need to do this function, and they need to do it carefully and well, but that role is frequently an add on to an already extremely time consuming job.  Principals can be supported in this function by robust peer observation and mentoring systems, but this would require that teachers also have additional time needed to mentor and evaluate each other.

2) Improve teachers’ working conditions. High poverty schools are notoriously difficult places to work, but not for the stereotypical reasons people presume.  Teachers who seek out such careers are often highly motivated by a desire to do good, but face overcrowded classrooms, decaying facilities and inadequate resources.  Further, lack of planning and collaboration time isolates teachers and makes it more difficult to access the expertise and insights of their peers.  The saying that a teacher’s working conditions are a student’s learning conditions needs to be seriously considered.

3) Remove the Sword of Damocles. We know that high poverty correlates to low test scores, and we know that the reasons are far more complicated than reformers’ preferred explanation of blaming teachers for everything.  But the past 15 years of education reform have constantly increased the pressure on schools and teachers to raise test scores without our nation taking the least collective responsibility for alleviating our appalling child poverty rate.  We should still test, but for diagnostic and triage purposes rather than to increasingly motivate skilled teachers to flee districts where they are professionally threatened without adequate support.

4) Discuss poverty and its effects of children.  Education reformers have been consistently silent on this front except to accuse people who want to talk about it of “making excuses” for bad teachers.  That is dishonest of them.  Over 20% of our children come to school from homes that are in poverty with the negative impact on resources and development that comes from that.  Many of our urban schools have student populations that top 75% in poverty.  As David Berliner notes, we are obsessed with “one-way accountability” for schools and teachers to change this without requiring anything more of ourselves as a society.

5) Recognize that tenure protects teachers who rock the boat on behalf of their students.  The due process rights with tenure may make removing a bad teacher more complicated than simply saying “you’re fired”, but it comes with important freedoms that teachers need.  Many teachers have pointed out that tenure protects teachers from being threatened with capricious or political removal when they advocate for their students’ needs or call out bad behavior that harms students.  John Goodlad called this “good stewardship” and it is a vital characteristic that we want to encourage among teachers.

Those attacking tenure seek to take that away from all teachers.  That’s why I oppose them.