Eva Moskowitz wants to continue to expand her Success Academy chain of “no excuses” charter schools, but is concerned that New York Mayor Bill de Blasio will not automatically and enthusiastically endorse her plans as was customary under Mayor Michael Bloomberg.  Following the model of her successful Albany rally last Spring that led to a state budget forcing New York City to pay rent for all charter schools, charter enthusiasts plan a rally for Thursday, October 2nd in Foley Square at 9am which they are dubbing “Don’t Steal Possible”.  I have seen organizers on social media promise as many as 10,000 attendees, many of whom I presume will be Success Academy teachers and students who, like the weekday rally in Albany, will be given time off from a scheduled school day to provide appropriate optics for the event.

“Don’t Steal Possible” refers to network supporters claiming that they are pleading with the de Blasio administration to not “steal” opportunities from NYC’s most struggling students who want to attend a charter school, especially a Success Academy charter school, where their success is “possible.”  Supporters have taken to Twitter with #DontStealPossible (as have detractors)  and both individuals and organizations, including Ms. Moskowitz herself, have repeated similar talking points about how their mission is driven for NYC kids “trapped” in failing schools:

The 143,000 NYC kids trapped in failing schools is a tremendous social justice issue. We need to be doing so much more. #DontStealPossible

The 143,000 kids that they repeatedly mention refers to a “report” from charter school advocacy group “Families for Excellent Schools” that cited 371 DOE schools where student performance on the 2013 state examinations did not pass 10% being labeled as proficient.  The purpose of the rally and of Ms. Moskowitz’s expansion plans is to offer “possible” to all of those students so that they can “escape” from their failed schools.

They really have some nerve.

There are many things galling about using the students at 371 New York City schools that serve mostly impoverished minority families as optics for a plan to expand the Success Academy chain, often into neighborhoods that are not struggling.  First, the article in the Daily News misrepresents the results of those state examinations, probably willfully.  These were the first examinations to align with the new Common Core standards, and they caused an extreme collapse of scores across the entire state.  Further, the examinations are not pegged to grade level skills in reading and mathematics. Period.  End of discussion.  “Proficient” in the new examinations is not a synonym for “grade level,” and anyone who mixes up those terms is misinformed or a liar.  Carol Burris, Principal at South Side High School, explains very clearly how the cut scores were set:

State Education Commissioner John King asked the College Board to “replicate research” to determine what PSAT and SAT scores predict first-year success in four-year colleges. The College Board was asked to correlate SAT scores with college grades to create probabilities of college success. You can read the report here.

Keep in mind that research shows that the SAT’s predictive power is only 22 percent. High school grades are a far better predictor of college success. The lack of validity of scores, without the context of grades, was not taken into consideration.

The New York study chose the following “probabilities” as the definition of college success:

* English Language Arts:  a 75 percent probability of obtaining a B- or better in a first-year college English course in a four-year college.

* Math: a 60 percent  probability of obtaining a C+ or better in a first-year math course in a four-year college….

….When the cut scores were set, the overall proficiency rate was 31 percent–close to the commissioner’s prediction.  The proportion of test takers who score 1630 on the SAT is 32 percent.  Coincidence?  Bet your sleeveless pineapple it’s not. Heck, the way I see it, the kids did not even need to show up for the test.

Argue, if you must, that the new proficiency standard is the appropriate way to set up how the exams are assessed.  But don’t call it “grade level” or “passing.”  They are neither of those things, nor were they designed to be those things.

Second, Ms. Moskowitz and her supporters are pleading, they say, on behalf of those “143,000 kids,” but there is no evidence from the work of her school network so far that Ms. Moskowitz would accommodate anywhere near all of those students even if her schools had enough seats.  First off, a lottery system, while in theory neutral, already skims from a student population by requiring parents and guardians who are informed enough about the system to actually apply in the first place.  Further, once students enroll in the Success Academy network, they are subject to attrition rates and rates of discipline that far outstrip the comparable DOE schools.  Success Academy 1 had an attrition rate greater than 50% since its opening school year in 2006-2007, and the network sends clear messages to parents that they do not want struggling kids in their schools.  The result, as demonstrated by Bruce Baker of Rutgers, is that Success Academies enroll far fewer students who are coming from high poverty homes, are English language learners, or have special education needs: 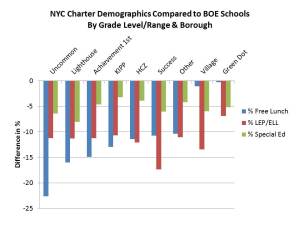 Success Academy wants you to believe that they are rallying so that nobody will “Steal Possible” from the students in New York City’s most struggling public schools, but all the data available about their past and current practices suggests that even if many of those students did win lottery seats in a Success Academy, many of them would be pushed out of the school.  Those children are being used to improve the appeal of Ms. Moskowitz’s expansion plans even though probably none of them will be present at tomorrow’s rally.  After all, they have school to attend, and no NYC principal is allowed to dismiss an entire school’s worth of children to a rally to pressure the mayor and Albany.

Third, if this was really a movement to tell the public and officials to “Don’t Steal Possible,” then one would assume that there would be causes involved that aided all of our city’s children, not just the ones that win charter lottery seats and are then allowed to stay at those charters.  Again from Professor Bruce Baker of Rutgers, Albany has manipulated its base state funding formula in ways that have shorted New York City somewhere between $3-4000 a YEAR per CHILD below previous calculations of state aid.  That amounts to $3-4 BILLION in state aid ANNUALLY that Albany has kept from reaching New York City.  Across the entire state of New York, the Gap Elimination Adjustment has deprived the average school district of $3.1 MILLION annually, and Governor Cuomo aggressively pursued and got a property tax cap so that districts cannot choose to make up the lost money locally.  Consider how much “possible” has absolutely been stolen from public schools in New York City and across the state by these policies, and then ask if Families for Excellent Schools and Success Academy’s wealthy backers in the financial industry will rally to change them.  The answer is, of course they won’t.  Those same donors and Ms. Moskowitz’s own PAC have donated generously to Andrew Cuomo’s campaign.

And this is the hypocrisy.  Ms. Moskowitz is going to excuse her teachers and students from a day of school to rally in alleged support of all of those kids she claims are “trapped” in “failing” DOE schools, and there is no doubt that an unacceptable number of our most vulnerable students are indeed in schools that struggle.  But there is NO evidence that Ms. Moskowitz wants all or even a bare majority of those students in HER schools.  There IS plenty of evidence that the most vulnerable children to reach a Success Academy find it very difficult to remain there, and there is incontrovertible evidence that Ms. Moskowitz and her financial backers support the reelection of a Governor who has choked schools of money for his entire first term in office.

UPDATE:  Courtesy of Mindy Rosier, a special education teacher in a co-located school, the Success Academy in her building has changed their normal Wednesday half-day to today, and the school is providing buses that met at 7:30am to take people to Foley Square.  The event is being billed as a “parent rally,” but with school at half day for the event, there is little doubt that many children will be accompanying them: 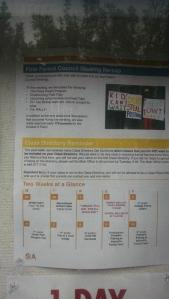