Governor Chris Christie of New Jersey is a Tough Guy.  The New Jersey Republican revels in his reputation as a politician who says what he thinks without apology and who is willing to get into dust ups with constituents who challenge him in public.  There have been moments in his tenure in Trenton when this has had a certain bipartisan charm, such as when, with Superstorm Sandy bearing down on the Garden State, the governor told people to “get the hell off the beach.”  Unfortunately, many more examples of Christie being “authentic” are unnecessary and embarrassing examples of temper — such as the time Governor Christie, when faced with former Navy SEAL and current Rutgers Law School student William Brown in a town hall meeting ended up calling the veteran an “idiot” and had him escorted out.

Here is Governor Christie also in 2012, expressing his anger at a passerby who made negative remarks about his education policies:

Then there was the time that Governor Christie was in the Jersey Shore community of Belmar to talk on the second anniversary of Sandy and tout his record on the recovery, but when he was confronted by a former Asbury Park city council member Jim Keady over how 80% of recovery money was not yet dispersed, Mr. Keady was treated to full Chris Christie:

Governor Christie has saved some his most “authentic” moments for New Jersey’s public school teachers and their union.  Early in his first term, he accused the union of using students as “drug mules” because of a civics lesson in Monroe Township on the eve of statewide school budget votes – after he had already proposed deep cuts to state aid.  The governor accused the NJEA of placing ads that accused him of “hating kids” and of openly praying for his death.  New Jersey teacher and blogger Jersey Jazzman makes clear just how big a pile of hooey those accusations are.  The “prayer” was little more than a joke in questionable taste, and this was the billboard in question:

The Governor has also made his hostility clear in direct confrontations with New Jersey teachers.  Marie Corfield, an art teacher in the Flemington-Raritan Regional School District, went to a Christie Town Hall in 2010 to challenge his education policies and rhetoric.  Mr. Christie, not appreciating what he deemed a disrespectful look on Ms. Corfield’s face, launched into a monologue that suited him so well, it went up on his Youtube channel to help cement his Tough Guy reputation. It also inspired Marie Corfield to run for Assembly:

And there was the time, days before his reelection, that Governor Christie met elementary teacher Melissa Tomlinson at a campaign rally where she asked why he was constantly calling New Jersey public schools “failure factories“.  The result was predictable: 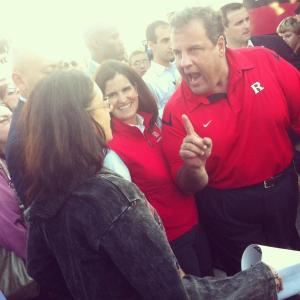 Governor Christie has been on board with education reform from the beginning of his term, applying for Race to the Top funding, adopting the Common Core State Standards, joining the PARCC consortium as a governing state, crafting new teacher evaluations using student test scores, and working to expand charter schools in the state.  Nobody can likely recall any doubt about any of these initiatives from anyone within the governor’s inner circle and certainly not from Governor Christie himself.  In fact, in August 2013, Governor Christie appeared at the KIPP Schools Summit in Las Vegas and spoke positively about the Common Core initiative and the Obama Administration:

“We are doing Common Core in New Jersey and we’re going to continue. And, this is one of those areas where I have agreed more with the President than not. And with Secretary Duncan. They haven’t been perfect on this, but they’ve been better than a lot of folks have been in terms of the reform movement.”

Given Governor Christie’s reputation for being a genuine Tough Guy who sticks to his guns even if it is not popular, it was odd to find that he apparently would like what was said in Vegas to stay in Vegas and is now walking back that support for Republican audiences in Iowa:

“I’ve said this before.  I have grave concerns about the way this has been done and especially the way the Obama administration has tried to implement it through tying federal funding to these things.  And that changes the entire nature of it from what was initially supposed to be a voluntary system that states could decide on their own.”

Lyndsey Layton in the Washington Post reported that Governor Christie went on in those remarks to say:

“So we’re in the midst of a re-examination of it in New Jersey. I appointed a commission a few months ago to look at it in light of these new developments from the Obama administration and they’re going to come back to me with a report in the next I think six or eight weeks, then we’re going to take some action. It is something I’ve been very concerned about, because in the end education needs to be a local issue.”

What could possibly be going on that would give the famously self confident and unapologetically “authentic” “Tough Guy” governor to start walking back from reforms he has been pursuing since 2010 with barely pausing to breath?  What could plant any seed of doubt in his generally doubt free mind?

Chris Christie is running for the Republican nomination for President.  One of his main rivals will be former Florida Governor Jeb Bush who is trying to stick with his support of Common Core while not naming it too often.  Governor Christie must be mindful that Republican support for Common Core has fallen in the past year with 58% of Republican parents opposing the standards and only 19% viewing them favorably.  While most of those opponents likely object to the standards on substantive grounds, Mr. Christie must also be mindful that conservative opposition to the standards also include no small number of these people:

…who also, according to popular theory, wield outsized influence in primaries.

Will trying to two step his support for education reform to the right of Jeb Bush work for Governor Christie?  I have no idea.  Recent polling suggests that Common Core may not be so toxic in all early voting states, and primary voters may not be as extreme and polarized as commonly thought.  So Governor Christie is trying to distinguish himself from Governor Bush, but to what effect is up in the air.

What is not up in the air is what this “rethinking” means for New Jersey: Bupkas.

The New Jersey Department of Education website still contains links to the Common Core State Standards in the English Language Arts and Mathematics and links to college and career readiness and to New Jersey’s resource page for teaching Common Core.  The AchieveNJ section of the DOE site is still up, complete with links to Student Growth Percentiles for teachers in tested subjects and Student Growth Objectives for teachers in all subjects.  PARCC assessments are still being fully implemented this spring as scheduled, and the Commissioner sent “guidance” to districts that strongly suggested that districts could face consequences if too many parents opted their children out of the assessments and that there was no requirement for schools to provide those students with alternative settings. Trenton-appointed Newark Superintendent Cami Anderson is still in place and still thundering ahead with the One Newark plan to turn the district into the “charter school capital” of the nation.

There is no sign that any of that is being reconsidered in Trenton.  Governor Christie may move one foot away from his education record while in Iowa or New Hampshire, but residents of the Garden State should expect the “Tough Guy’s” other foot to stomp down with emphasis right where it already is.

3 responses to “Chris Christie and the Common Core Two Step”

Writing and Activism by P.L. Thomas