Imagine, for a moment, you are a teacher predominantly of students of color.  Now imagine that one of your students’ siblings is a 12 year old playing in a public park with a toy pellet gun when police, responding to a caller who said that the gun was “probably”fake, pull their cruiser within feet of the child, jump out before the car even stops, and shoot him in the stomach within two seconds.  Or perhaps your student’s father was shopping in a Walmart where he picked up a BB gun from the store shelves, and police officers approached him and shot him without giving him any time at all to respond – despite the fact that what he was carrying was a toy from the store’s own shelves.  Or perhaps your student’s aunt or older sister is driving long distance to begin a job at her alma mater in Texas when she is pulled over for a very minor traffic violation, and during the stop, the officer becomes increasingly hostile to her legitimate questions, threatens her with his taser, violently throws her to the ground and arrests her without ever explaining why – and she is found dead in her jail cell in an alleged suicide that not one of her friends and family believes. 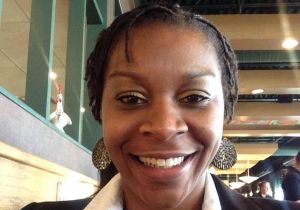 And now imagine that in not one of these cases is a single person even required to stand trial for deaths of young black people simply minding their own business.

Of course, these tragedies – and the infuriating aftermaths that send a chilling message about how black lives can be cut down on the slightest or imagined provocation by state actors with no fear of consequence – do not have to be directly connected to your students’ lives.  All they need to do is watch these events unfold in the news and wonder if it will ever be someone they know and love.  Or they can reflect on their own experiences with discrimination and the gradual toll it takes on their psyche.  The reality is that if you are a teacher of students of color in America, these events impact the children in your care, possibly more deeply than you have ever known.

Very talented authors with far more authentic ties to these experiences of racism and the horrendous messages we send to young people of color have written on the what these outcomes feel like and the dire sense that our society is inherently hostile to black bodies.  Charles Blow’s words upon the death of Tamir Rice are searing.  Brittany Cooper astutely points out how the system does not value black lives. Ta-Nehisi Coates wrote to his teen aged son (in an article adapted from his book) about the reality of life for black people to this day:

Boys and girls touched and confused by tragedies – both personal and national in scale – enter teachers’ classrooms every day.  Young men and women whose consciousness of injustice is flaring brighter than America’s white majority can possibly understand enter teachers’ classrooms every day.  In today’s education environment – where achievement scores matter far more to policy makers than the humanity of those in school – this poses a difficult and possibly contradictory dilemma. As teachers, our responsibilities to children demand that we acknowledge and affirm the lived realities of their lives.  It further demands that we confirm their sense of injustice in the world in real and substantive ways.  Even though most teachers will never experience racism the way their students of color do, it is vital that they work to help those students maintain visions of their futures and how to obtain them as they navigate their lives.

But perhaps most important, and most difficult, is the need for teachers to admit our own culpability in an oppressive social system and to join our students and their communities in actively opposing it.  School is, for better or worse, a social institution, funded and shaped by our collective aspirations – and by our numerous failings.  If our police departments openly engage in racial profiling and use selective enforcement of the law as a revenue stream, and if politically popular policies of mass incarceration leave millions of mostly black and Hispanic men unable to find work, and if the water minority children in cities like Flint drink can be replaced with toxic sources to save money, and if the right to vote itself is subject to constant and organized obstruction aimed at diffusing the impact of minority voting, can we really absolve our schools and ourselves from any responsibility for the injustices that impact so many of our students?

Individually, teachers may bear little responsibility for the school to prison pipeline and the different policies that quickly consign students to low expectations and betrayal of their right to an equitable education – although there can be no honest denial that many teachers either willingly or unthinkingly support questionable and actively harmful disciplinary practices in their schools.  But both individually and collectively, teachers can lend their voices to the public discourse on education and demand that the chief architects of school’s role in devaluing of young people of color be called out.  We can speak out against the deliberate and chronic underfunding of schools for our most vulnerable children.  We can oppose the constant threats of school closures that disproportionately impact black and Hispanic children.  We can demand to know why schools with high proportions of black and Hispanic children are most likely to have police officers who increasingly treat school disciplinary matters like law enforcement on the street.  We can argue for smaller class sizes, improved physical plants, and the replacement of rigid zero tolerance discipline with restorative justice practices.  We can call out politicians and school officials who ignore that schools cannot afford libraries or librarians and have to cut their art and music programs.

In short, we can demand, loudly and continuously, that all of our students have the schools that the most privileged in society take for granted.  For three decades now, we have replaced calls for equity and justice in schools with calls for accountability and consequences in much the same way that we have made policing and our prisons rougher and more concerned with numbers than with justice.  Those policies have failed us as a nation, and they have been catastrophic for our most vulnerable children.  Millions of children are told that the only choices they have are between chronically underfunded and decaying zoned schools or a privately operated charter school that may work to push them out of the school or whose discipline policies favor total control of behavior rather than fostering leadership. This horrendous dichotomy cannot be the best a society with 17 trillion dollar GDP can deliver.  If it is so, it is because we choose to let it be so.

Schools themselves cannot transform society, but if millions of public school teachers can demand the tools and resources we need to truly transform schools into models of social justice that fully affirm the lives of students, perhaps we can lead the way for the rest of our critical institutions.  Perhaps we can gain the moral authority to demand it.

We owe it to the children to try.

The Merrow Report
Wait What?

Working to educate, persuade, engage and mobilize through "perceptive and acerbic" observations about Corporate Education Reform and Connecticut Government and Politics

A blog focused on education and social justice

Navigating student activism/organizing and teacher education on a journey towards becoming an educator. Fighting for and creating a new vision of public education while occasionally blogging along the way.